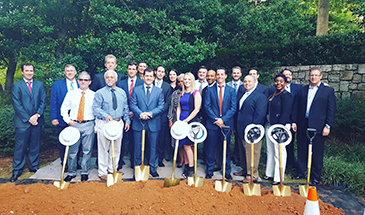 Gov. Nathan Deal, along with Georgia Department of Transportation (GDOT) Commissioner Russell McMurry and State Transportation Board member Mark Burkhalter, today broke ground for the Interstate 285/State Route 400 interchange improvement project. This project, which follows the design-build-finance construction method and serves as a model for public-private partnerships, is expected to be completed in 2020 and will generate cost savings of approximately $300 million.

“This interchange improvement project will address traffic congestion and improve safety for one of the most congested intersections in our highway system,” said Deal. “The design-build-finance contracting method used in this project will save taxpayers roughly $300 million, funding that has already been reinvested into other transportation projects around the state to complement our 10-year, $10 billion plan. Investments such as this one are essential to providing congestion relief for commuters and preparing our infrastructure for more freight and business traffic so that Georgia can remain the No. 1 state in which to do business – a distinction we earned for the fourth year in a row just yesterday.”

The I-285/SR 400 interchange improvement project includes improvements on I-285 from west of Roswell Road in Fulton County, to east of Ashford Dunwoody in DeKalb County (4.3 miles) and on SR 400 from the Glenridge Connector to Spalding Drive (6.2 miles). The enhancements include construction of new flyover ramps, new collector-distributor lanes and other facilities to aid east-west travel on I-285 and north-south travel along SR 400. The project also includes a diverging diamond interchange on Abernathy Road at SR 400 and an extension of the PATH 400 trail system to inside the perimeter. The completed project is expected to save commuters who travel the corridor eight hours per year and reduce daily delays for all users of the interchange by 20,000 hours.

“The Transform 285/400 Improvement Project is a great example of a public-private partnership bringing value to the citizens of Georgia by letting private sector innovation and financing build a better and more cost-effective project,” said McMurry. “This $800 million investment to improve this interchange will stand as the centerpiece of a larger connected network of highway improvements that will move people – in cars and transit vehicles – over the next decade.”

The total project budget is approximately $800 million, including $10 million from Perimeter Community Improvement Districts (CIDs), $1 million from the PATH Foundation, $1 million from the city of Sandy Springs and partial financing from GDOT project partner North Perimeter Contractors, LLC. The Perimeter CIDs are home to more than 123,000 Georgians and 5,000 businesses, including three Fortune 500 companies. This same public-private partnership model is currently in use on the Northwest Corridor express lanes project on Interstate 75.

“This project is the start of a major upgrade of the transportation network around metro Atlanta,” said Burkhalter. “The next decade of planned improvements along I-285 and SR 400 will change the way we think about mobility and travel options as our state continues to grow and be an economic leader.”

Limited construction related activities including geotechnical work, surveying and inspections are underway, with major construction set to begin in the first quarter of 2017.

Ferrovial picked as preferred proposer for Virginia’s I-66, representing an...
Scroll to top