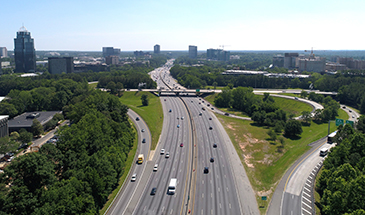 A plan to alleviate traffic congestion on two of metro Atlanta’s busiest interstates achieved a key milestone Thursday with the state’s hiring of a firm to design and build the new I-285/Ga. 400 interchange — one of the most expensive road projects in state history.

The state transportation board on Thursday selected North Perimeter Contractors to helm the project at a cost of $460 million, bringing the revised total for the project to $679 million. That price tag is significantly below the state’s initial cost estimate of $1.1 billion for the new interchange.

More importantly for the more than 400,000 drivers who commute through the area every day, the vote is a huge step toward getting shovels moving on the project three years after Gov. Nathan Deal made it his top transportation priority.

“Today our state has taken another step in the right direction to facilitate much needed relief to commuters and area businesses,” Deal said in a statement.

Still, the relief the I-285/Ga. 400 will bring is four years away with construction not expected to be completed until June 2020.The new interchange will resemble the I-85/I-285 interchange, better known as Spaghetti Junction, only with a slightly smaller footprint and four flyover bridges instead of five.

In addition, two-lane access roads will be constructed along I-285 from Roswell Road to Ashford-Dunwoody Road, and along Ga. 400 from Glenridge Connector to Spalding Drive.

GDOT has said that during the three-year period while construction is ongoing, the public will probably have to contend with evening and weekend lane closures, and perhaps even occasional workday lane closures. However, much of the work can be done outside of the lanes of traffic.

Once complete, the project is expected to be a boon for business, since it will help keep freight moving through what is now a major bottleneck.

“This project will be a wonderful case study to show Georgians how major infrastructure improvements on the opposite side of the state can have a positive economic impact on their communities,” said Seth Millican, a spokesman for the Georgia Chamber of Commerce. “This project will be of critical importance to the state’s freight network as we look to the deepening of the Savannah Harbor and exponential increase in freight activity around the state.”

The business community was a major backer of the project, with the Perimeter Community Improvement Districts (a self-taxing business district) chipping in $10.5 million.

Yvonne Williams, president of the Perimeter CIDs, said the organization had been advocating for improvements to the interchange for 12 years.

The vote doesn’t mean it’s a done deal. It means negotiations will proceed with North Perimeter Contractors and, if all goes as planned, a final contract will be inked in April.

The total cost was initially projected to be $1.1 billion. It was not immediately clear how the low bidders were able to shave so much off the tab.

In a public-private partnership deal such as this, design details from proposals are kept secret during contract negotiations since they contain proprietary information. The confidentiality is necessary in case the deal falls through and the state winds up contracting with another group, said GDOT Commissioner Russell McMurry.

A brief summary of the proposal available online indicated that the design proposed by North Perimeter Contractors would reduce the need for steel spans (part of the flyover bridge structure) by half, saving construction time and maintenance costs. The team is a partnership between contractor Ferrovial Agroman US Corp and engineering firms The Louis Berger Group and Neel-Schaffer.

They have proposed to begin construction in February 2017. Details of the all the design proposals will be disclosed after the contract is officially awarded.

The $834 million reversible toll lanes currently being constructed along I-75 and I-575 in Cobb and Cherokee counties remains the state’s most costly road project to date.

TIMELINE FOR GA. 400/I-285 INTERCHANGE RECONSTRUCTION

For more information about the I-285/SR 400 interchange reconstruction, including summaries of each team’s proposal, visit http://www.dot.ga.gov/BS/Projects/I285SR400.